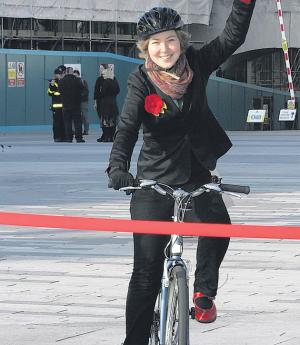 FROM THE DAILY ECHO:

MANY motorists stuck in Southampton’s morning rush hour must have wondered if there’s an easier way to get to work.

Now it’s been proven there is – with a commuter race through the city centre.

As the Daily Echo continues with the Don’t be a Fuel Fool campaign, which looks at ways of getting around the rising costs at the pump, it’s been shown that ditching the car on the daily commute could save time as well as money.

A car driver, cyclist, walker and bus user set off at 8.30am from Southampton General Hospital yesterday morning to settle once and for all which is the quickest way to get across the city.

It was cyclist Thea Bjaalan, 30, from Portswood, who crossed the finish line at Guildhall Square first, having made the 3.5mile journey in a time of 15 minutes.

And she says she didn’t even pick the quickest route – but instead opted for a scenic ride through Southampton Common.

She said: “It was probably slightly quicker to go the road way but it was a really nice cycle ride through the common. The sun was shining, there were no cars – it was a treat and definitely better than being in the car and getting annoyed by the traffic lights and other drivers.” [Read the whole story here.]