Southampton has marked national Bike Week with a series of popular events reaching out to new and old cyclists across the city.

On Saturday, the Family Bike Cavalcade was graced by VIPs including the Mayor of Southampton and city MP Alan Whitehead. Stuart Mason-Elliott joined the ride on his 1874 Penny Farthing (fresh from his triumph at the head of the Naked Bike Ride the previous evening!). Riders followed a loop from Bargate to Mayflower Park then up the parks to the Peace Fountain. 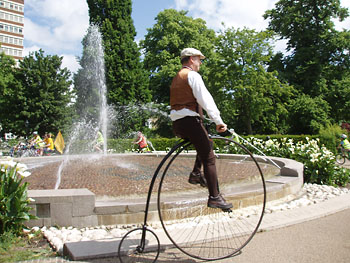 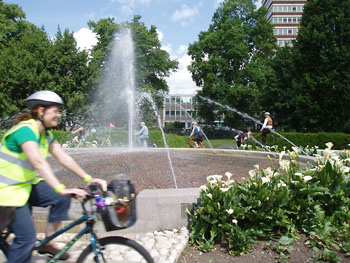 The following day, the Big Bike Celebration, organised as part of the Sutrans Street-tread project, featured an array of displays and activities, including the try-a-bike arena with The Company of Cyclists, mountain bike displays by M.A.D. (Europe’s largest stunt/trials display team), a bicycle smoothie-maker, and the Bike Doctor providing a free health check for bikes.

Yet to come we have Five Miles to Fabulous (June 20), a five mile, easy ride aimed specifically at women, and promoting the health and fitness benefits of cycling.